Car ride home was fairly uneventful. I like to think that she was taken by us immediately.  She was very sweet.  whimpered slightly, but stayed in my arms for 1.5 hours.  We couldn’t get over how much of a fuzz ball she is.  I couldn’t help just petting her soft fur.  I think she liked it.

That first day, she was very timid – but wasn’t quite scared, stayed mainly in the family room where we put her crate. We led her to the hallway where we put her food and water bowls, so she got used to that path quickly.   She spent her day sniffing around and exploring.  Didn’t make a sound.  She already found a favourite spot – on the shag rug in front of the couch.  That’s where she naps. She had such droopy sleepy eyes.  Her ears are flopped over (haven’t raised up yet though the breeder was convinced it will).  I rather like her like this.  She was introduced to the kong toy, her crate, the backyard. She seems rather mellow happy puppy!

Then the night came.

And the holy terror of all cries and howling ensued.  for many many many hours.

We read about how we are supposed to ignore her.  We stayed in the family room on the couch – where she can see us – but she in her crate (with a makeshift divider to make it sized for her puppy form as all has suggested).  after 20 mins of crying and jumping on the door, she went quiet.  We felt triumphant. our puppy is not like others! she did it! horray!

and then 40 mins or so later. she woke up. and stayed up.  and cried and howled and scratched the bottom of her crate until 6am.  she would stop for 30 mins or so, and then resume.  She sounded like an orca whale singing, a wolf howling at the moon, a monkey shrieking, or just an unhappy puppy in her new crate.  We finally took her out around early morning. and it was golden silence once again.  she felt asleep immediately on the shagged rug, and passed out finally.  Us? not so much.  welcome to being new puppy parents?!

Day 2:  after breakfast (she ate very little), we played with her a bit, got her to follow the rope – we don’t want to play aggressively with her yet, so we let her take the rope from us, but she follows and does a little hop to run.  sooo cute. and then it was time for her first Vet appointment – just to get an exam. She was so calm in the waiting room, even with other dogs around.  Ellie attracted lots of attention. not that she cared. she just sat on the floor, quiet as can be.  She weighed 11lbs.  “big paws” I was told.  Nick got a bit nervous hearing that…does that mean she’s gonna be bigger than expected?!  she even felt so relaxed that she fell asleep while being examined.  Cue selfie aka our first family photo! Ellie got her first visitors in the afternoon: Irene and Sean; then Noha and Nadeem, and then Derrick – all came to welcome Ellie home.  Ellie was mellow, sleepy, and sweet.  Ate half her dinner.  o, and first accident on the hardwood.  First of many I’m afraid. Night came. o the hysteria.  We were once again in the family room with her so that she can see us. nope. that doesn’t help. The ticking clock thing? that worked for 20 mins or so. The crate is mostly covered with blankets to create a den-like atmosphere.  Took her out at 3am as part of her housetraining routine.  whimpers when she comes out of the crate. snuggle and rub herself on my legs like a cat.  back to the crate. back to the crying.

Day 3 – played, peed, pooped, napped, and ate.  and repeat.  we moved upstairs to sleep this night.  we need some semblance of sleep.  but we come down and take her out every 3 hours.  unfortunately she had an accident already by the time we came down at 3am.  a messy accident. very messy.

Day 4 – left her in the crate during the day for 3 hours. came home to a messy crate where she stomped all over the pile in her hysteria.  dang. second time in 12 hours of cleaning everything.  the nature miracle odour eliminator bottle is going to run out real fast at this rate.  Ellie is very sleepy during the day – likely as a result of her crying and not sleeping at night.  We made a choice tonight – we removed the divider of the crate. despite everyone saying that puppies don’t eliminate where they sleep, it was just too much with her stomping all over it after.  and then miracle happened.  she stopped crying.  omg. we discovered what troubled her.  she was claustrophobic?! the girl likes her space!  We felt so proud of her – no crying overnight, no accidents! VICTORY!

Day 5 – more housetraining – more accidents in the house – it’s definitely our fault though – we haven’t figured out her puppy schedule.  We started a journal of her sleep time, wake up time, pee times, poo times, food times.  Right now i think she pees every 2 hours.  Ellie is mostly a happy puppy, still naps quite a bit, but super sweet.   more friends came that night to visit with Ellie that evening.  Another victory tonight – she learn to SIT!  (thanks to Mike).  it’s her only command so far.  The girl doesn’t even know her name, but heck, i’ll take it!  every small achievement is a victory in our house!  hugs and kisses for our Ellie! Day 6 – Another victory today – she rang the bell to go outside!! and it was legit! wasn’t a fluke!  we’ve been doing this since day 1, held on to her, and put her paw on the bell before opening the back door.  My coworker friend Karen suggested it as her dog does it now to signal her.  great idea.  holy crappers – it works!  She only did it twice so far, but heck if we’re not celebrating that!  o, and the night crate thing?  so far so good. she needs to be coaxed into it at bedtime, if she gets up before the 3 hour timer, she barks. but quiets the moment she knows we are near.  it’s quiet in between, so we’re taking turns bringing her out to potty at night (once around midnight, once around 3am).  then up at 6am-ish.  yes, we are officially morning people now.

Day 7 – last day of her first week with us.  it’s been a long week, but looking back now, it already seems like Ellie has been with us forever. She is much braver now, she wanders throughout the first floor (not the front door or the office though).  She runs/hops while chasing her ball/rope.  She has a personality, she has mannerisms.  She wags her tail whenever one of us comes home, happy to see us.  She is ours. Ellie our 8 weeks Sammy with her ball 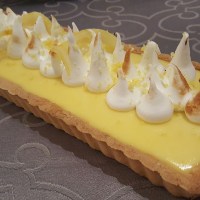