I came across a Pinterest post that was super smart and creative – she used Ikea Malma mirrors as the backdrop for her photos.  Brilliant! and so cheap!  I love Ikea hacks!  Rather than getting a typical photo frame that would be easy $5-10 each, the Malma mirrors was $1.99 each!  Plus it is surprisingly hard to find a frame that has a square insert.  Ikea had one, but it was $12 each.  nope.  that just won’t do.

This little arts and craft project was fun and super easy. and really took all of 15 minutes to do.  I would say the hardest/longest part was opening up the tight plastic that came with the mirror!

Oh, and the actual hanging of the frame afterwards by Nick took some time – not because it was difficult – he just put in a screw with a head that would fit into the pre-drilled hole at the back of the frame. He likes to use his laser leveler and ensure everything is measured out and precise. super cute.

Here’s all I used to do this project.  Trusty Mod Podge glue that I already had, paper cutter (already had), a small sponge brush, and the Ikea Malma frames. I didn’t bother sending my pictures to a print shop, I just did it on my colour laser at home.  Total cost including tax: $13.56 for 6 framed Instagram pictures of my puppy! Since I had my paper cutter, I thought I would bust it out instead of using boring scissors.  made the project seem that much more hardcore lol.  each picture was cut to 3.75″ x 3.75″.  I love my puppy pictures! then spread a thin layer of mod podge onto the mirror itself.  careful not to get any on the frame – but can easily wipe it off if so carefully place the picture into the mirror – sliding it slightly into the frame so that nothing is sticking out, including the corners. Then I applied another thin layer of mod podge over it – being very careful at the brush strokes that it leaves behind.  Once it dried, it actually gives it a “canvas” like effect. 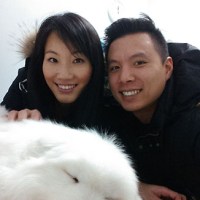